Air edgers provide very high impact air force so are a good choice of nozzle for air blow off drying / wiping. The high impact from air edgers mean that they can often be used to wipe liquid from complex shaped objects where other less powerful air focusing devices would fail. This is because a complexly shaped object will inevitably shield part of its surface from the air force. It is often impossible to get a complete 360 degree air blast around the whole object so some parts will rely on the deflected air currents from the initial impact points. As such the air blow off effect is greatly reduced and so requires a much bigger initial force if it is to be effective. And example would be drying bottles on a conveyor.

The positioning of air nozzles and other compressed air enhancement products is of critical importance. The different styles of product mean that different factors need to be considered when thinking about positioning.

Some products like air blades and ring blades are designed to help remove many of the hassles of position. Due to their shape they deliver air flow along their lengths meaning there is no need to consider the spacing between individual nozzles. The main consideration, therefore, with these products is distance from the target.

The closer the target is to the air knife, blade or edgers the more impact it will receive. There will normally be some practical constraints on exactly how close to the target the air nozzles can be positioned, and, it may be that too much impact is undesirable anyway. The datasheets in the product sections below give approximate air impact data at various distances and supply air pressures. This will help determine where the product need to be positioned for optimal results,

Air nozzles are designed to produce very focused “spot” jets of air force. Air jets, on the other hand, produce a slightly broader spread of air but with reduced impact. So, when an area needs blow off, consideration needs to be given to how far apart the individual nozzles will be. The data sheets will show the approximate patterns and spread of the air flows from different nozzles at various pressures and distances. This will help determine positioning. Also the distance from the target will, like as with air knives, ultimately determine the blow-off force seen by the target.

When compared to blower systems enhanced compressed are blow off systems are very easy to maintain. Whether the system is comprised of air nozzles, air knives, air jets or air edgers there are no moving parts involved and no external power is required. This means that there is virtually nothing to go wrong with the blow off system.

The simplicity of these systems means they can be deployed in areas that would preclude the deployment of powered blowers. In dirty, wet or humid areas of the production facility any powered equipment requires often costly protection to prevent it breaking down. This may involve water proofing or additional filtration / dust protection. Compressed air systems require none of this and so, in such environments, they are intrinsically more reliable.

Noise is a constant hazard when using air systems. Both blowers and compressed air blow off systems can be very noisy and constant exposure to high noise levels is a big health and safety concern. Indeed, there is stringent legislation in many countries that limit workers exposure to certain noise levels in the work place. As such noise reduction is often a critical design factor in air blow off applications.

A raw open air line may produce dangerous levels of noise perhaps 98 Db or more. All the compressed air enhancement nozzles supplied by ANP will reduce this noise significantly whilst, at the same time, enhancing the blow off force achieved for any given air pressure. For example an air edger using similar air pressure to an open pipe may reduce the noise level form 98 to 74 Db. This 24Db reduction, give the logarithmic nature of the decibel system, means the noise is reduced by a factor 2.4, simply changing the nozzle can result in under a quarter of the noise level.

Standard air knifes will normally reduce noise by 10dbA which means a halving of noise levels when compared with open pipe systems. The advanced silent x-stream air knives, however, typically deliver 15dbA reductions in noise. The extra 5dbA (compared to standard air knives) may not seem like much but is actually an extra 50% noise reduction. Similar results can be achieved form air edgers. 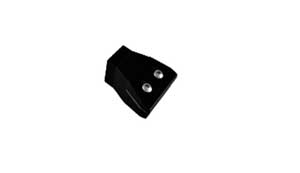